The development of the schematics for the OggStreamer are almost finished. If you want to take a look at it you can find it here:

OggStreamer Analog and VS1063 – Draft9

Today i want to briefly introduce the inner workings of the OggStreamer. It basically consists of three main Parts: a XportPro, a STM8S microcontroller and a VS1063 Audio DSP. 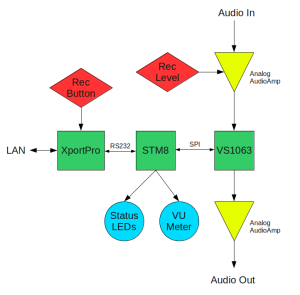 XPortPro’s Task is to transmit the ogg-datastream over Ethernet – Therefore it can upstream the data to an IceCast2-Server on the Internet or it can feed its own built-in IceCast2-Server, which is capable to serve a small number of online listeners. The Record push-Button is connected directly to the XPortPro.

The STM8S microcontroller acts as a bridge from the XPortPro RS-232 to the SPI-Bus of the VS1063. And it translates commands between those two interfaces. Further it autonomously updates the values of the VU-Meter

The VS1063’s purpose is to encode (or decode) ogg/vorbis. In the case of encoding the analog audio signal enters the device and from the device we get a digital audio stream in already compressed ogg/vorbis format.

The circuit of the OggStreamer also consists of two analogue stages. An input audio amplifier and an output amplifier. We added the input amplifier in order to control the amplitude of the incoming signal (so that the most dynamic range can be used without clipping). The output stage was added in order to protect the VS1063 from ESD issues.

It will still take a few weeks till the OggStreamer PCBs are ready. Therefore i decided to build a small Prototyping Board for the XPortPro. The Board consists of the XportPro, a LDO, a Pushbutton, a USB-Connector (only for the +5V) and a connector suited for an FTDI Basic Breakout-Board from Sparkfun. This board is single sided and i used pcb milling to manifacture it. BTW: If you are in Europe and looking for a cheap source of milling bits i can recommend 24cut.de to you.

On this Board i want to develope a basic software skeleton of the OggStreamer-UI (debouncing the button and maybe a multithreaded-structure) and i also want to test the ucLinux Port of the IceCast2-Server.

One of the planed features for the OggStreamer is the integration of a small Java/Flash OggPlayer – which can be started directly from the builtin webinterface. Stumbling accross the Internet i found a very cute piece of Software doing exactly that task: FFMp3 – it is Flashbased and licensed under GPL2. The software is quite slim as well: around 150 kBytes (including graphics for the skin). And it is compatible with both Shoutcast and IceCast2-Servers.

Software can be found under: http://ffmp3.sourceforge.net/

If you ever wondered how the OggStreamer is going to look like – there is a design study done with my graphics programm of choice. GIMP – what else?

Not quite up to date but still useful for general information. you can find a mid-2010 project-documentation under http://www.otelo.or.at/fileadmin/content/OggStreamer/OggStreamerDoku-CC-BY-SA.pdf

Hello out there – with this Blog i want to document the Progress of the OggStreamer Project. The OggStreamer is a small device intended to convert analog Audio into digital Ogg/Vorbis format. The converted Data is streamed to an IceCast2 Server from where people around the world can listen to the so created LiveStream.